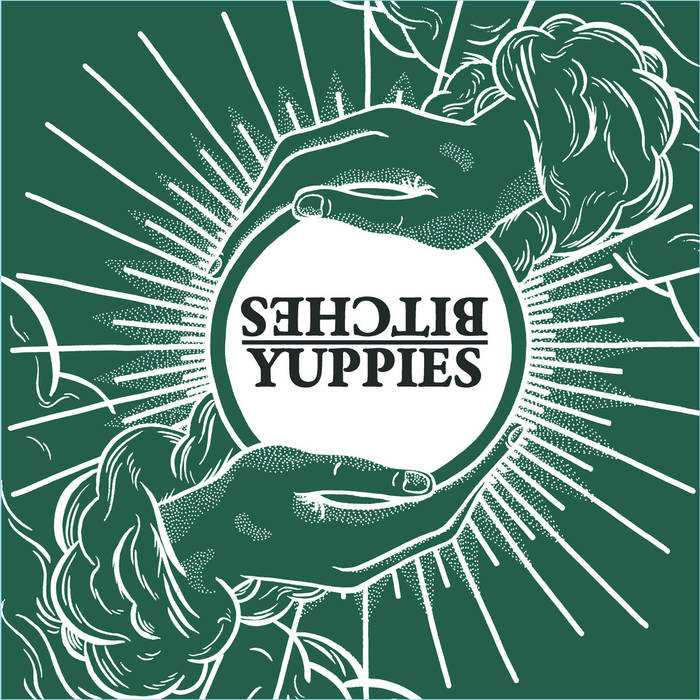 The second limited 12” split from the Palmist label features two young bands both originating from their own respective DIY scenes,who together deliver an intense and gripping record that barely lets up over it’s 30 minutes+ running time. Whilst both bands have an interest in what could loosely be described as the tradition of punk music, they explore this in very different ways; BITCHES’ tightly wound interlocking rhythms contrasting perfectly with the sloppy spontaneity of Yuppies’ 8-track recordings.

BITCHES have been known to call their music ‘thug-pop’, others have plumped for ‘anti-love songs’, ‘chaotic sonic can-vases’ and cited comparisons to Minor Threat and Black Flag, Huggy Bear and Lightning Bolt’s more riffy material. Nevermind the tags and kooky descriptions, the power of BITCHES’ music lies in Blake Ivinson’s screams and ultra-fuzzed bass; or in Stacey Owen’s chaotic, heart-in-mouth drumming and agit-yelping; and in the incredibly pleasing sensation when you realise that, yes, they have sardonic and punked-out songs about vampires, R. Kelly, and losing one’s wallet. In short, if you have ever had any interest whatsoever in punk/noise music, anti-social volume, and the combination of the two, Bitches are a pure joy to experience, live and on record.

For all the noise they make, BITCHES are a two-piece. Both Blake and Stacey spent time in Oxford bands (The Walk Off and Harlette respectively) before becoming London-based and writing together (the two are a couple, and as Blake explains, were “[hanging around] together anyway.”) Previous releases have mostly been on tapes, by labels like Deathbomb Arc, Scotch Tapes and Isolated Now Waves (a split with Shearing Pinx), or they have been self-released like the ‘Winner’ 7” (their full discography can be found at their website, www.peaceandbitches.com). They play shows whenever they can and have played (in one case, semi-nakedly, after Stacey commanded a Californian audience to undress) rapturously received shows in the USA, at venues like LA’s storied DIY space The Smell.

Nebraska’s Yuppies’ mix of fuzzed-out garage rock and late 70’s punk, combined with a distinctly lo-fi aesthetic, has seen them christened with the Shitgaze tag by some, indeed they were once referred to as ‘Psychedelic Horseshit fucking Thomas Function while Times New Viking plays on the stereo and TV Ghost hide in the closet and watch.’ Whilst this gives an idea of the band’s contemporaries, Yuppies are too enthusiastically awkward to be pigeon-holed into any one scene and on their side they navigate everything from sprawling post-punk to stumbling anti-folk, often within the same song. Their songs hit you with a youthful exuberance and tracks such as “Sunglasses” with its first verse of “I like girls that wear Sunglasses/ I like girls that cook big breakfasts/ I like girls that get good grades” is an unabashedly fun teen anti-anthem that seems to revel in its own inanity. There is, however, an impassioned core to many of Yuppies songs, helped by vocalist Jack Begley’s intense delivery that recalls the sneer of John Lydon and the swagger of a young Henry Rollins. Songs such as ‘For the Future’s sake’ rage against apathy, pleading to anyone who will listen; ‘For the future’s sake stay alert,’ though only after tempering that urgent call with ‘For the future’s sake inhale deep’.

Formed of Jack Begley (Guitars, Keyboards, Vocals), Kevin Donahue (Drums), Jeff Sedrel (Bass Guitar) and Noah Sterba (Guitar and Vocals) Yuppies have released a 7” entitled ‘I’ve Been Touched’ on Grotto Records, and a split 7” on Dutch Hall with recent tour buddies Noah’s Ark was a Spaceship. They have an enthusiasm for playing live that you would expect when listening to these records, and it has been amazing to hear from a whole range of American bands we’ve been talking to how they saw Yuppies playing some dingy bar one time and how good they were. We’re just jealous we can’t be in the U.S this year to see them on a mammoth tour that sees them criss-cross the country from May to June.